Private Research releases Tuesday 10/29 in ebook and 11/26 in print. You can pre-order today:

In the meantime, enjoy this excerpt from the book!

He looked as if he was going to say something else about it, but with one vodka martini under my figurative belt and another dangerously close to sloshing over the rim in my unsteady grip, I didn’t want to talk about the research anymore. As usually happened when the alcohol took hold, I had a decidedly oral fixation. And I was studying Sebastian with a new appreciation for his features, the slight shadow under his cheekbones, the generous length of his thin lips. It would take me days to fully explore his body with my mouth, with my tongue. Kissing him would be—

“Not very much time at all.” I met his eyes, startled that he’d read my thoughts. “Did you find your link?” I inched closer to him. His eyes narrowed in something that maybe was confusion. Which made me stop. Rethink.

Then I laughed, at myself, at the conversation, at how close I’d come to jumping the gun on this.

He raised an eyebrow, and I put my drink down. Searched for an excuse.

“Maybe we’d better order some food,” I said with an apologetic shrug.

“Americans don’t know how to drink,” he said, shaking his head.

“Or maybe we do.” I stared into my glass, finger running along the rim. “In any event, I haven’t found it yet. The link. Proof.”

At Sebastian’s beckoning gesture, the waitress came by and we ordered.

I looked back up at him again. Found him watching me attentively.

“Then I adjust, adapt. Simply because I want something to be one way doesn’t mean it is.” Only, I wasn’t talking about the work. I was talking about Sebastian and the way I’d felt about him. About my romantic ideals, my dreams of love and even an ephemeral thought of white dresses and babies, which had been shattered so easily, first casually by him and then ruthlessly by me.

Was my plan for the evening another ruthless attack on myself, or was it really the right thing to do? Healing in a twisted way?

“That’s an excellent perspective to have,” he said, clearly missing the subtext. “Adaptability is the key to success.”

I laughed. “I’d bet you haven’t had to adapt to failure ever.”

“Sebastian Graham, you seem like the type to have what you want fall into your lap.” Even as I spoke, I knew it was the alcohol that made me so forward, so flirtatious. The alcohol and the fact that I had liked him once upon a time.

I froze for a moment, and then smiled, reaching for my drink. I held it up as if I were about to make a toast.

“We could remedy that.”

To celebrate the release of The Short and Fascinating Tale of Angelina Whitcombe, today (7/31) I am giving away a signed copy of Jennifer Haymore’s new release, Pleasures of a Tempted Lady.

To enter to win, find me on Twitter.com/SabrinaDarby and RT the giveaway tweet. Alternately you can message me here at my website before midnight tonight Pacific time and say you would like to be entered into the giveaway!

More giveaways, so check back all week!

Also, to win Angelina and see a video interview of me, stop by MacLeanSpace . (MacLeanSpace is the home of the fabulous historical romance author, Sarah MacLean.)

The Short and Fascinating Tale of Angelina Whitcombe releases in just over 24 hours! You can find me all over the web this week with giveaways, both of the novella and of goodies I’ve brought back from the Romance Writers of America conference I attended last week.

And please check my twitterstream (twitter.com/sabrinadarby or @sabrinadarby) every day because I’ll be doing special giveaways there as well!

You can purchase the novella at most online retailers including, Amazon, Barnes and Noble, Kobo and iTunes.

The last week of July is action packed!

First, the release: On July 31, my new novella, The Short and Fascinating Tale of Angelina Whitcombe, releases digitally. (And it looks like the price is set for an awesome $.99, at least for pre-order!) Those of you who want print will unfortunately have to to wait till August 14th to order it. 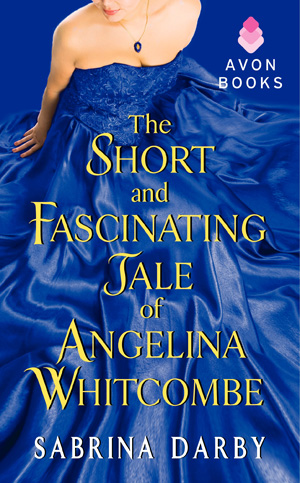 And of course, with a new release, there are the giveaways: On July 30th, I’ll be celebrating the release at TheBallroomBlog.com. My book The Short and Fascinating Tale of Angelina Whitcombe is also up for grabs during the #SummerRomance Festival at Freado. http://bit.ly/L9Hor0 (If you use the code “ROMANCE”, you get 500 bonus points.) If you are already a Freado member, you can access my book directly at http://www.freado.com/bid/1936/the-short-and-fascinating-tale-of-angelina-whitcombe-by-sabrina-darby

Then there are the conferences:

1) This year Romance Writers of America’s National Conference will be in Anaheim, California and so will the annual literacy signing. Over 400 romance and young adult authors will be signing books to raise money for literacy. 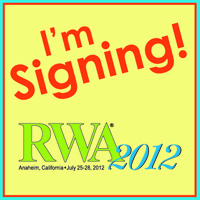 Also, on Thursday, the 26th of July at 9:30 PM, the authoresses of The Ballroom Blog are having a get-together in the Marriott bar. Feel free to join us!

And on Saturday, July 28th, for attendees of the conference, I will be part of a workshop given by the authoresses of The Ballroom Blog at 9:45 AM.

2) If you don’t live in Southern California, but you are a romance writer or a romance enthusiast, you can attend RomanceDivas.com’s free virtual conference(7/25-7/28), featuring Workshops, Q&As, Door Prizes, Pitch Events and more! I’ll be there as well (virtually!). 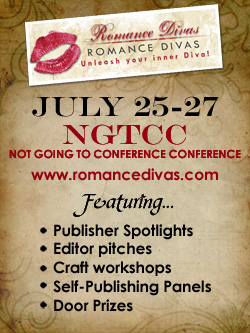 So here is the cover for The Short and Fascinating Tale of Angelina Whitcombe, which releases at the end of July from Avon Impulse. So exciting!